There are not many better feelings than finally getting that long-awaited and overdue promotion. For one, becoming an office manager usually comes with a pay raise. Who can’t stand to receive a little more money on their paycheck each week? The title also brings new responsibilities along with it too though. If the individual is not prepared for the duties, they can crash and burn in the blink of an eye. Read further to learn about some useful tactics that can help you succeed in the endeavor. 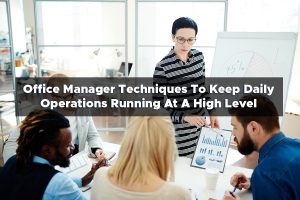 It can prove to be challenging to meet deadlines and get projects finished when everyone in the workplace is not on the best of terms. An office manager can change all of that by getting to know their coworkers. Nobody is saying that people have to become the best of friends outside of work, but the building of in-office professional relationships is critical. All employees need to put their best foot forward and keep the company’s best interests in mind. After all, the organization hired them to do a job and achieve goals. The easiest way to accomplish these feats is by working together as a cohesive unit.

The office manager will likely have made some friends along the way before receiving his or her promotion. There is nothing wrong with this action, but it is of the utmost importance for the person not to show favoritism to the companions after advancing in the ranks. All of the coworkers need to be treated as equals to prevent conflicts from arising. For instance, one individual should not be given perks just because they are an acquaintance. Instead, do your best to disperse them fairly and according to company policy.

• Continue Learning And Trying To Be Better

Don’t get complacent and believe that you know it all after becoming an office manager. There are plenty of others that want the position, and these people will attempt to take away your power. Stay up to date on the latest technologies, pay attention during meetings, and challenge yourself to be the best leader that you can be. Not only will you help your own career, but in turn, you will also boost the employees by pushing them to be better, which will benefit the company as a whole.